CONCORD, Calif. (RNS) — Sayed Hashmi, an Afghan citizen, did not want to leave his country. But when U.S. forces pulled out and Kabul, his hometown, fell to the Taliban, he knew his work with American agencies made him a target for the new government.

Hashmi immigrated with his family in October 2021 to San Francisco’s East Bay. Adrift in a new country, Hashmi desperately sought refugee services and support. Advised to call Jewish Family and Community Services, he could not disguise the anxiety and frustration in his plea for help.

The accent on the other end of the phone immediately put him at ease; the speaker hailed from his homeland. Hashmi had reached Fouzia Azizi, who is the head of refugee services for JFCS East Bay and is also a refugee from Kabul.

“Fouzia gave me the feeling that I’d found my sister,” Hashmi recalled. “She talked with me for two hours and said everything will be OK.”

The Taliban’s takeover last August exacerbated the global refugee crisis: More than 700,000 Afghans were displaced from their homes, joining the more than 6 million who fled during the past 40 years of war. Almost 85,000 have come to the U.S. this past year, many of whom worked for U.S. companies, the American military and American agencies.

This is a significant increase from the 78,000 Afghan refugees who immigrated to the U.S. between 2001 and 2021. Most of the new refugees are being resettled in Texas, California and Virginia, with faith-based organizations such as JFCS playing an active role. Since August 2021, Azizi and her staff have helped nearly 700 refugees, most of them Afghans.

Despite the agency’s name, Azizi, along with most of her colleagues and clients, are Muslim. 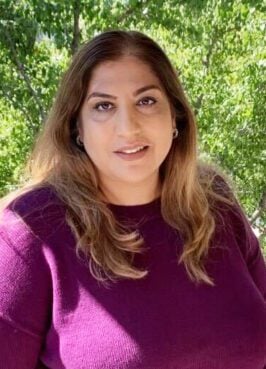 “Fouzia is a faithful woman,” Hashmi said. “That’s why she has so much heart for helping. It’s associated with her beliefs.”

Azizi’s “heart for helping” draws from her experience as much as her faith. In 1994, Azizi, her parents and siblings crossed the border into Pakistan. Expecting a short stay, they carried few possessions. But weeks turned into months and months into years.

“There was no support for refugees in Pakistan,” Azizi recalled during an interview in her JFCS office in Concord. The room is decorated with Afghan wall hangings, family photographs and a comfortable armchair. “I had two outfits. When I washed one, I wore the other.”

During her years in Pakistan, under the auspices of international agencies, Azizi taught refugees and launched a school for girls, recruiting from Afghan families who were skeptical about educating females.

In 2000, some members of her extended family came to the U.S., but it took six more years for her family to be granted refugee status. After a multiday journey with stops in Karachi, Germany and New York City, they arrived in Oakland and into the arms of family.

They depended on these relatives for help with signing up for benefits, registering for public school, finding English classes, locating an apartment and looking for work. Azizi stayed at home with the children while her husband started a business. When the children were older, she found a job as a translator, making use of her fluency in Pashto, Hindi, Farsi, Dari, Urdu and English. Eager to work with refugees again, Azizi began volunteering at JFCS in 2016.

Soon after, she was hired as a case manager, and in 2020 she was tapped to head the department for refugee services.

Comfortable in her own skin, brightly dressed with bright pink tapered nails and jewelry that makes a statement, Azizi has a strong and reassuring presence. Her honey-blonde hair falls in waves past her shoulders, and her large brown eyes miss nothing.

She recognizes that her agency’s name might raise Muslim eyebrows. “There was some feeling because the first word is Jewish,” she admitted, when asked about her decision to volunteer. “But JFCS is a family. I’m proud of our organization’s core value to provide service and care at all stages of life.”

JFCS’ values dovetail with her own: treating every person with dignity and respect — a precept, she notes, that is fundamental to Islam.

“Islam is a religion of peace. Killing one innocent person is the same as killing humanity,” she said, reinforcing that terrorists and suicide bombers are not practicing correct Islam.

Growing up, Azizi saw her father pray five times a day and attend mosque regularly. He made certain his daughters were as well educated as his sons and supported their plans for professional careers. Azizi, who once planned to be a lawyer, never thought religion circumscribed her choices; rather, Islamic teachings called for women to be strong, educated and capable.

“Islam encourages women to have the same level of education as men,” she said. “But in Afghanistan, culture is stronger than religion, and we mix up the two.”

When Kabul fell last year, JFCS only had two case managers. Mina Walizada, the program’s resettlement coordinator and a fellow Afghan, and Azizi worked alongside them to welcome the flood of new arrivals.

“Fouzia and I did everything — housing, home visits; we worked around the clock,” Walizada said. “She is my role model. She has a strong voice and will speak loudly if she sees anything unfair.”

Since then, they have hired four more case managers and three managers working in the field. Many of the new hires are Afghans, who themselves are new immigrants and can understand their clients’ needs.

Sayed Hashmi, the refugee whom Azizi personally assisted, recalled how she helped him find a place to live and a job.

“The U.S. is a difficult place to be a refugee,” he said. “My situation is good because of Fouzia.”

Azizi knows from her own experience the difficulty of adjusting to a new country. Despite JFCS’ help, some of her clients prefer their traditional culture to Western mores. Others resent being resettled in the country that played such a large part in turning them into refugees.

Still others are frustrated by the day-to-day hardships of establishing a new life. “If you provide services, you find out how broken the system is,” said Azizi. Insufficient public transportation, the lack of quality child care, the paucity of health care for low-income people and the dearth of well-paying jobs all complicate resettlement.

Azizi’s workday doesn’t end when she goes home. Calls come in and emergencies arise. When she’s ready for bed, she takes inventory of the past day. Could she have responded better during a hard conversation? Did her behavior befit a difficult situation? Islam calls her to treat each person she encounters with respect, dignity and kindness, and her goal is to do better each day — despite the challenges.

“Every day is a new day. I’m a little bit overwhelmed with the nature of the work because it’s tripled now, but I’m not tired of helping people,” Azizi said. “I’m still full of energy for the work, and it gives me peace.”