(RNS) — Big Freedia, a hip-hop artist who is sampled on the “Break My Soul” track of Beyoncé’s new “Renaissance” album, says she usually prays with her team before going onstage.

Neelam Hakeem, another performer in the genre, thinks hip-hop is “the rebel” in a time when more people are leaving religion.

And Brandan “BMike” Odums, a visual artist who grew up prohibited from listening to rap music in his preacher-father’s home, said hip-hop “reminded me that hope was not exclusive to a religious practice.”

The three artists were part of a dinner and dessert panel discussion examining the intersection of hip-hop music and Black faith released online on Sunday (Aug. 14). Filmed in New Orleans for “gOD-Talk 2.0: Hip-Hop and #BlackFaith,” the panel was the seventh installment in the Smithsonian’s National Museum of African American History and Culture “gOD-Talk” series. It continued an in-person and online series of discussions about the spirituality of Black millennials, Black religion and technology and African American belief and sexuality. 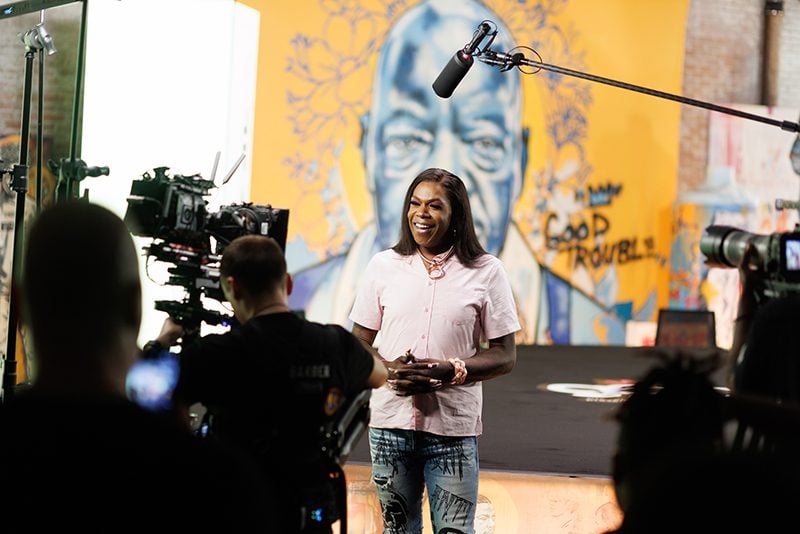 The gOD-Talk series started in 2018 after the museum partnered with the Pew Research Center, which has found that Black millennials tend to be more religious and more spiritual than their peers but less spiritual and less religious than older generations of African Americans. 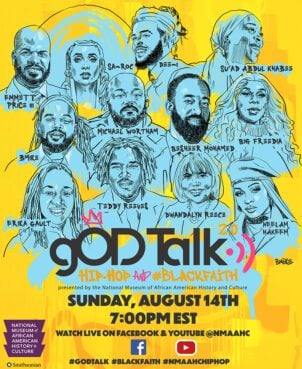 The panelists discussed how reaction to hip-hop music has also reflected generational differences — and their inherent religious tensions — noting how some religious leaders considered the genre to be offensive even as hip-hop artists critiqued churches for their resistance to women leaders and LGBTQ people in their congregations.

“Hip-hop was the only form of music where the elders did not lead,” said Emmett Price III, dean of Africana Studies at Boston’s Berklee College of Music. “It was the young people because the elders were offering solutions that in our young minds: They didn’t work for y’all. They ain’t going to work for us.”

Across “multiple generations of hip-hoppers,” lyrics in songs such as DMX’s 2003 “Thank you” (“I thank the Lord for my wife”) relate the trauma of the times along with a hope for the future, Price said.

A genre known for its DJs and breakdancers and graffiti, hip-hop was created in the Bronx in the late 1970s and has rapidly expanded across the U.S., especially in the South and the West, and its stars are now widely popular around the world.

Asked by moderator Teddy Reeves, the other co-leader of the museum’s center on Black religious life, panelists discussed if the musical genre is a religion itself or a means to point people toward faith. Dee-1, left, and Brandan “BMike” Odums pose during the filming of “gOD-Talk 2.0: Hip-Hop and #BlackFaith,” in New Orleans. Photo by Ashley Lorraine

Su’ad Abdul Khabeer, author of “Muslim Cool: Race, Religion and Hip Hop in the United States,” said that though the hip-hop movement was youth-led, it was influenced early on by figures such as Nation of Islam leader Malcolm X, whose voice was featured in “Malcolm X – No Sell Out,” a 1983 track by Keith LeBlanc.

“These kinds of things, like Islam, are very much a part of how they began to articulate and interpret and understand what it is — what are we living with that we’re now going to rhyme about, or dance about, or write about,” she said.

Khabeer noted the genre can create a pathway to self-awareness, resistance and even adoption of one or more faiths such as Islam, Rastafarianism or Five Percenters, a Black nationalist movement that split from the Nation of Islam in 1963.

“It kind of leads you on this path of knowledge of self,” she said.

Hip-hop artist Dee-1 added that, though he doesn’t see hip-hop as a religion on its own, performers of the genre can successfully reach listeners in ways some clergy cannot.

“Hip-hop allows messages to be communicated that pastors can’t get through by just preaching,” he said. “So hip-hop is definitely effective as a train, as a carrier of messages. But I think it is leading people to things like God, to religion, instead of it being a religion.”

The hip-hop artist Sa-Roc said that when she’s writing she feels as though “the ancestors whispered this to me or the angels whispered this to me,” and compares her and other artists’ work to prophets, given what they hear from supporters about how their music is interpreted: “‘This song or these words saved my life,’ or ‘I felt like church when I’m listening to this.’”

Big Freedia, who grew up in a Black Baptist church in New Orleans, is known as the “Queen of Bounce music,” a subgenre of hip-hop, and added: “A lot of people tell me when they come to a Freedia show, they felt like they came to a bounce revival or they felt some type of spirit come into the room.”

Besheer Mohamed, a senior researcher for Pew, said his research has found that many Black Americans have said opposing racism is a part of what it means to be a good Christian or a good Muslim. Increasingly, especially younger Black people feel the same way about opposing sexism and gender discrimination, but they hear less about those issues in sermons, so they may look for those messages elsewhere.