(RNS) — American Airlines isn’t a religious company, but if you wander around their corporate buildings you might stumble onto an ablution station for Muslim purification rituals, a Jewish employee group meeting or even Father Greg McBrayer, a collar-wearing Anglican priest who is both chaplain and chief flight dispatcher for the airline. Today, after decades of religious diversity efforts, American Airlines was recognized as the most faith-friendly Fortune 500 company in the U.S., topping a tech-dominated list that also included Intel, Dell and PayPal.

The 2022 Corporate Religious Equity, Diversity and Inclusion Index (REDI Index) measured the religious inclusion of the Fortune 500 companies and found that 40% highlight religion on their main diversity webpage, while 7.4% publicly share about their faith-based employee resources groups (ERGs). This year, American Airlines outpaced Intel and Texas Instruments, last year’s top scorers, thanks to its religious diversity trainings, established spiritual care programs and eagerness to share best practices with others, according to the report.

The REDI Index was initially launched by the Religious Freedom and Business Foundation (RFBF) in 2020 to spotlight religious diversity in corporate spaces. This week, the RFBF is hosting its annual Faith@Work Conference for Fortune 500 companies in Washington, D.C.

Brian Grim, president of the Religious Freedom and Business Foundation, told RNS that corporate momentum around religious diversity is continuing to accelerate. “On average, I have a new company every week reaching out,” said Grim. He added that, while companies like American Airlines, Intel and Texas Instruments have been involved in religious diversity work for decades, corporations have only started publicly promoting these efforts in the last few years. Ford Motor Company, a sponsor at this year’s Faith@Work Conference, has had its interfaith network for more than 20 years, but this conference is the “first time they’ve ever shared what they’re doing outside the walls of their company,” according to Grim. 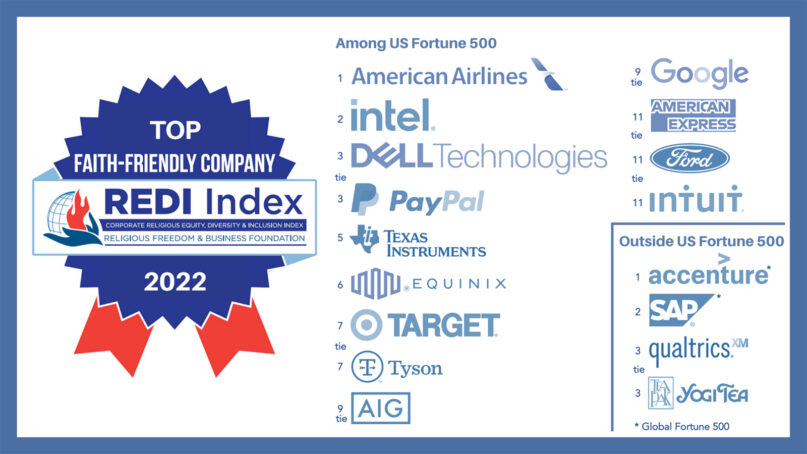 The REDI Index report highlighted other standout religious diversity initiatives, such as Cigna’s many religious celebrations (including Kwanza, the pagan festival Yule and the Zoroastrian festival Ghambar Maidyarem), Intel’s eight faith/belief-based employee resource groups (including ones for agnostics/atheists, Sikhs and Baha’is) and Tyson Foods’ 100 chaplains.

This was the first year the REDI Index expanded to include Fortune 500 companies; previous iterations looked at the Fortune 100 and 200. The RFBF also incorporated an opt-in survey this year that allowed companies to elaborate on their achievements in 10 areas of religious inclusion and support, including the presence of chaplains, religious accommodations and whether they match employee donations to religious charities.

Companies were also encouraged to submit descriptions of initiatives not covered in these categories, such as American Airlines’ Abraham’s Tent events. These interfaith gatherings are regularly hosted by religious leaders who address a topic (“the afterlife,” for example) from their faith perspective. According to McBrayer, the longtime American Airlines chaplain, these events break down silos between faith groups and nurture a more collaborative work environment.

“You just cannot compartmentalize the things that are your core values,” McBrayer told RNS. “And if you’re a person of faith, that’s going to be your faith. That’s the core of everything I bring into my workday. As a Christian, I’m going to do the very best I can for God every day. And people in a business want that.”